Treadstone now offer's DiabloSport's lineup of high performance tuning products, ranging from their popular Trinity tuners to the Power Puck and inTune! Check out the link below to see the product lineup!   http://treadstoneperformance-website.nebhub.com/product/search_product?keyword=Electronics%3A+Engine+Management%3A+DiabloSport+Tuning
Read More
Ksport's complete line of high performance coilovers are now available on Treadstone! Everything from the popular Kontrol Pro Coilovers to the incredible Asphalt Rally Coilovers, Ksport helps to keep your car's tires sticking to the road!   Ksport Coilovers

Read More
Turbosmart has come out with an updated lineup of Fuel Pressure Regulators, designed specifically to work with the increased fuel pressures of modern day cars. Fuel pressure has increased over the years due to the increase in the usage of direct injection and turbocharging. Always at the cutting edge of new technology, Turbosmart have addressed this by releasing a V2 range of Fuel Pressure Regulators, specifically designed for modern day high performance systems. The new FPR-800v2 and FPR-1200v2 combine the high performance 1:1 ratio features of our the top-end, race application FPR-2000 and 3000 models with the day-to-day requirements of street tuned performance vehicles. With the V2 Fuel Pressure Regulators, Turbosmart is once again leading the market with innovative technology. See the full press release after the jump.

Overview: Over the last few years, new engine technology has seen a rise in base fuel pressures, while the search for ever increasing boost pressures continues. With this in mind we have combined the high performance 1:1 ratio features of our FPR-2000 & 3000 models with the day to day requirements of our existing FPR-800 & 1200 to create the FPR-800V2 and FPR-1200V2. The V2 regulators still have all of the existing high end features: • Billet construction • 30-70psi base pressure adjustment • 1:1 ratio • Suitable for a wide range of fuels including methanol and E85 • Available in either Blue or Black • Large range of hose fittings, fuel rail adapters and spare parts available In addition, the update improves static sealing, meaning better fuel delivery for engine start-ups. Applications: FPR-800V2: Ideal for modified street cars with up to 800hp fuel systems. FPR-1200V2: Ideal for modified street or race cars with up to 1200hp fuel systems. Part Numbers: FPR-800v2 BLUE: TS-0401-1001 FPR-800v2BLACK: TS-0401-1002 FPR-1200v2 BLUE: TS-0401-1003 FPR-1200v2 BLACK: TS-0401-1004 Pricing (MSRP): FPR-800v2: $199.99 FPR-1200v2: $259.99
Read More
We appreciate your patience and support in our quest to fill the void between the ID1000 and ID2000.  While both are great injectors, there are many applications that will benefit from something in between. The ID1300 is an all new injector, designed in partnership with Bosch Motorsport to fill that void.   This collaboration has given us the ability to design a high flow injector with characteristics specific to the needs of the high-performance tuner.  TheID1300 is not a modified production injector. It is a clean sheet design, built to our engineering specifications, exclusively for Injector Dynamics. The ID1300 was designed with alternative fuels in mind, and is the only high performance injector available with all stainless internals.  It is compatible with all known fuels, and will stand up to the corrosive nature of alcohol better than any injector on the market. While the ID1300 was designed with an eye towards ethanol fueled engines, we have accounted for the occasional need to convert back to gasoline.  The ID1300 has a minimum fuel mass compatible with gasoline use, and will provide exceptional idle and cruise behavior under these conditions. In addition to its multi-fuel capabilities, the compact body of the ID1300 allows for fitment in more than 200 applications, making it one of the more versatile injectors in our lineup.

Read More
When it comes to reducing aerodynamic drag, the APR Formula GT3 Mirrors are an excellent choice.  These carbon fiber mirrors are compact and aerodynamically-shaped for a low drag coefficient.  All mirror housings are reinforced with layers of carbon fiber sheets for weight reduction and added strength.  The 5.5” Wide Angle Convex Mirror Lens eliminate blind spots and have a blue anti-glare tint to reduce reflections from headlight glare during night-time driving.

Read More
Designed for marine applications, these 316 Stainless Steel T-Bolt Clamps feature additional corrosion resistance to help keep your hoses clamped without failure, looking clean and rust free for life! Perfect for connecting silicone hoses and exhaust connections on marine boats and skis! Never worry about hoses blowing off under boost pressure or rusty old clamps. These corrosion-resistant T-Bolt Clamps are constructed of 316 Stainless Steel with 316 stainless bolt and nut. They can also be used to secure slip-fit exhaust joints and are proudly made in the USA! Please be sure to measure your silicone or exhaust tube correctly. Please note that our sizes match directly with the Treadstone Silicone Hoses and are oversized .25", so a 3-inch clamp fits a 3-inch hose and will have 0325 on the clamp. The clamp sizes take into account the wall thickness of our silicone and are .25" larger than the specified diameter. If you are using 4 or 5 ply silicone, be sure to order the next size larger. -Designed for salt water marine applications -Increased corrosion resistance, will never rust! -Available in a variety of sizes -Bolt, nut, and band are all 316 Stainless Steel -Made in the USA   View Marine Grade 316 Stainless Steel T-Bolt Clamps 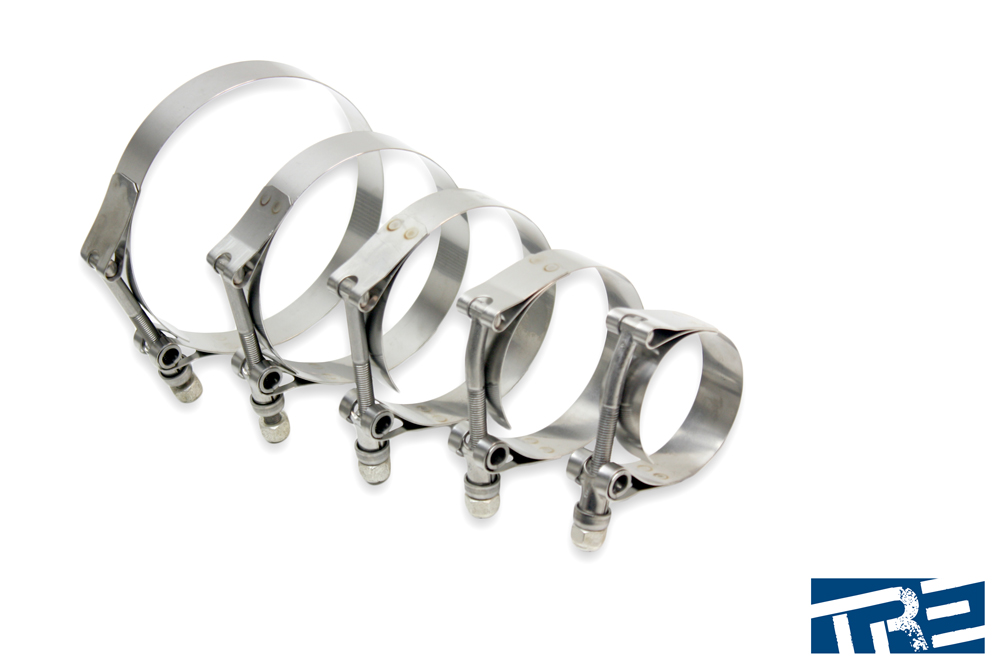 Read More
The insane Subaru WRX STi that we have built as a Time Attack car is now for sale! Unfortunately we've been overwhelmed with business and projects that we no longer have time for our dearly beloved. This beautiful Impreza WRX STi has only 3158 miles on it, and was never daily driven. It has tons of go-fast modifications, including carbon fiber everything (almost), high performance engine and suspension mods, roll cage, and more! This car's KBB price is listed at over $30,000, and has $33,500 invested into it. We are selling it for half the price of the mods, so right now the price sits at $45,000. Check out the eBay Auction below! http://cgi.ebay.com/ebaymotors/2006-Subaru-Impreza-WRX-STi-Time-Attack-Car-BRAND-NEW-ONLY-3158-MILES-/200933984096?_trksid=p3984.m1555.l2649&ssPageName=STRK:MESELX:IT&forcev4exp=true#ht_1734wt_1165   The description and additional pictures are available after the jump.

Up for auction is my dearly beloved 2006 Subaru Impreza WRX STi with only 3158 miles on it. I am the owner of Treadstone Performance Engineering, and this was my personal vehicle that I purchased brand new off the show room floor. This car was only used for business purposes to design and market a turbo upgrade kit and intercooler kit. The car was only driven to shows and events in the Miami area, and was never ever daily driven. I intended to build the car to compete in time attack, but running a business overwhelmed me and the car never made it. It pretty much sits in my garage being driven around the block once a month to keep the engine lubed. Last year, I spent a few thousand on replacement lexan windows for the entire car which were never installed this is an approx 100lb weight reduction. A dry carbon fiber roof was professionally installed dropping close to 25lbs off the top of the car. Lightweight carbon fiber doors were also installed last year, dropping probably 60lbs. Carbon fiber driveshaft drops some weight while reducing rotational inertia and parasitic drag. Carbon fiber hood and trunks also drop considerable amounts of weight. With all these weight reductions this would make for an excellent time attack platform. The cars interior has been stripped down, but I do have a lot of the old parts.   This car is in perfect like new condition, with very little miles and approx $33,000 invested. KBB puts this car at $30,233 excellent condition With the parts that were put into it, I'm expecting half the value of the parts of $33,500 for a total of about $47,000   [gallery link="file" columns="4"]
Read More
<< Back to Dealer Center
Read More
Welcome to the Treadstone Dealer Center. Here you will find product information, price sheets, and other information readily available. If you have any questions, feel free to call us at 1-888-789-4586.
Read More
1 2 3 4 5 6 7 8 9 10 11 12 13 14 15 16 17 18 19 20 21 22 23 24 25 26 27 28 29 30 31 32 33