Whats a Turbo? A In-depth Explanation of What a Turbocharger is and its Intended Function! 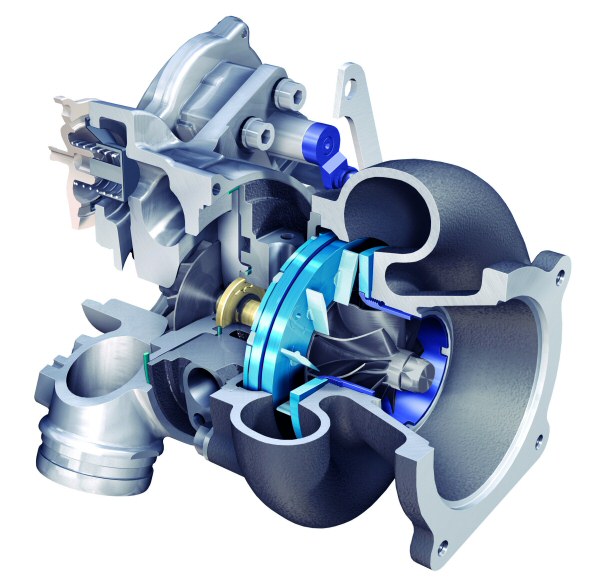 Principle of operation A turbocharger is an exhaust gas driven supercharger. All superchargers have a gas compressor in the intake tract of the engine which compresses the intake air above atmospheric pressure, greatly increasing the volumetric efficiency beyond that of naturally-aspirated engines. A turbocharger also has a turbine that powers the compressor using wasted energy from the exhaust gases. The compressor and turbine spin on the same shaft, similar to a turbojet aircraft engine. The term supercharger is very often used when referring to a mechanically driven turbocharger, which is most often driven from the engine's crankshaft by means of a belt (otherwise, and in many aircraft engines, by a geartrain), whereas a turbocharger is exhaust-driven, the name turbocharger being a contraction of the earlier "turbosupercharger". Because the turbine of a turbocharger is in-itself a heat engine, a turbocharger equipped engine will normally compress the intake air more efficiently than a mechanical supercharger. But because of "turbo lag" (see below), engines with mechanical superchargers are typically more responsive. The compressor increases the pressure of the air entering the engine, so a greater mass of oxygen enters the combustion chamber in the same time interval (an increase in fuel is required to keep the mixture the same air to fuel ratio). This greatly improves the volumetric efficiency of the engine, and thereby creates more power. The additional fuel is provided by the proper tuning of the fuel injectors or carburetor.

The increase in pressure is called "boost" and is measured in pascals, bars or lbf/in². The energy from the extra fuel leads to more overall engine power. For example, at 100% efficiency a turbocharger providing 101 kPa (14.7 lbf/in²) of boost would effectively double the amount of air entering the engine because the total pressure is twice atmospheric pressure. However, there are some parasitic losses due to heat and exhaust backpressure from the turbine, so turbochargers are generally only about 80% efficient, at peak efficiency, because it takes some work for the engine to push those gases through the turbocharger turbine (which is acting as a restriction in the exhaust) and the now-compressed intake air has been heated, reducing its density. For automobile use, typical boost pressure is in the general area of 80 kPa (11.6 lbf/in²), but it can be much more. Because it is a centrifugal pump, a typical turbocharger, depending on design, will only start to deliver boost from a certain rpm where the engine starts producing enough exhaust gas to spin the turbocharger fast enough to make pressure. This engine rpm is referred to as the boost threshold. Another fact to observe is that the relation between boost pressure and compressor rpm is somewhat exponential, and the relation between compressor rpm and airflow is very small. A turbocharger that is pushing 15 psi when the engine is at 3000 rpm will only have increased a little bit in speed when maintaining the same pressure at 6000 engine rpm; given that it is still within the design limits of the compressor. For this very same reason, belt driven centrifugal superchargers have a very narrow power band and deliver max boost only when the engine is at max rpm. A disadvantage in gasoline engines is that the compression ratio should be lowered (so as not to exceed maximum compression pressure and to prevent engine knocking) which reduces engine efficiency when operating at low power. This disadvantage does not apply to specifically designed turbocharged diesel engines. However, for operation at altitude, the power recovery of a turbocharger makes a big difference to total power output of both engine types. This last factor makes turbocharging aircraft engines considerably advantageous—and was the original reason for development of the device. 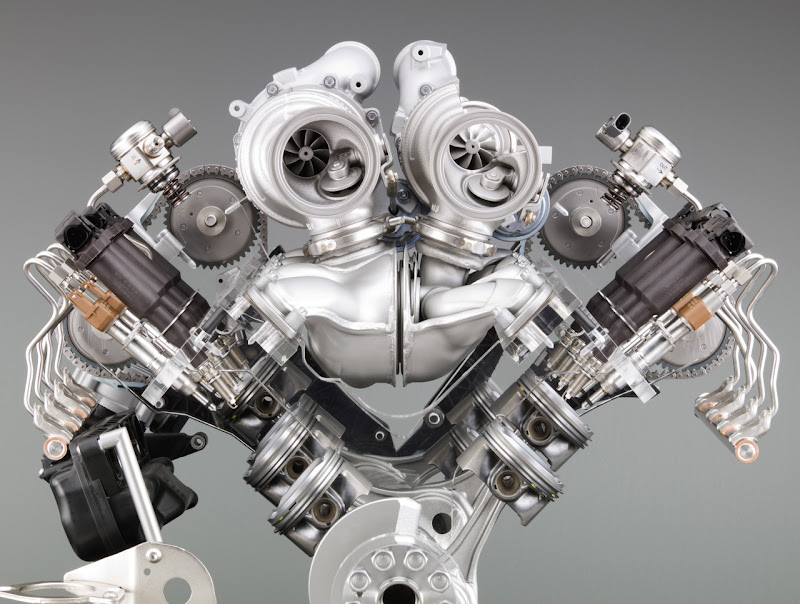 A main disadvantage of high boost pressures for internal combustion engines is that compressing the inlet air increases its temperature. This increase in charge temperature is a limiting factor for petrol engines that can only tolerate a limited increase in charge temperature before detonation occurs. The higher temperature is a volumetric efficiency downgrade for both types of engine. The pumping-effect heating can be alleviated by aftercooling (sometimes called intercooling).

Design details When a gas is compressed, its temperature rises. It is not uncommon for a turbocharger to be pushing out air that is 90 °C (200°F). Compressed air from a turbo may be (and most commonly is, on petrol engines) cooled before it is fed into the cylinders, using an intercooler or a charge air cooler (a heat-exchange device). A turbo spins very fast; most peak between 80,000 and 150,000 rpm (using low inertia turbos, 190,000 rpm) depending on size, weight of the rotating parts, boost pressure developed and compressor design. Such high rotation speeds would cause problems for standard ball bearings leading to failure so most turbo-chargers use fluid bearings. These feature a flowing layer of oil that suspends and cools the moving parts. The oil is usually taken from the engine-oil circuit and usually needs to be cooled by an oil cooler before it circulates through the engine. Some turbochargers use incredibly precise ball bearings that offer less friction than a fluid bearing but these are also suspended in fluid-dampened cavities. Lower friction means the turbo shaft can be made of lighter materials, reducing so-called turbo lag or boost lag. Some car makers use water cooled turbochargers for added bearing life. Turbochargers with foil bearings are in development which eliminates the need for bearing cooling or oil delivery systems. To manage the upper-deck air pressure, the turbocharger's exhaust gas flow is regulated with a wastegate that bypasses excess exhaust gas entering the turbocharger's turbine. This regulates the rotational speed of the turbine and the output of the compressor. The wastegate is opened and closed by the compressed air from turbo (the upper-deck pressure) and can be raised by using a solenoid to regulate the pressure fed to the wastegate membrane. This solenoid can be controlled by Automatic Performance Control, the engine's electronic control unit or an after market boost control computer. Another method of raising the boost pressure is through the use of check and bleed valves to keep the pressure at the membrane lower than the pressure within the system.

Some turbochargers utilise a set of vanes in the exhaust housing to maintain a constant gas velocity across the turbine, the same kind of control as used on power plant turbines. These turbochargers have minimal amount of lag, have a low boost threshold, and are very efficient at higher engine speeds. In many setups these turbos don't even need a wastegate. The vanes are controlled by a membrane identical to the one on a wastegate but the level of control required is a bit different. The first car manufacturer to use these turbos was the limited-production 1989 Shelby CSX-VNT. It utilised a turbo from Garrett, called the VNT-25 because it uses the same compressor and shaft as the more common Garrett T-25. This type of turbine is called a Variable Nozzle Turbine (VNT). Turbocharger manufacturer Aerocharger uses the term 'Variable Area Turbine Nozzle' (VATN) to describe this type of turbine nozzle. Another common term is Variable Turbine Geometry. Reliability As long as the oil supply is clean and the exhaust gas does not become overheated (lean mixtures or retarded spark timing on a gasoline engine) a turbocharger can be very reliable but care of the unit is important. Replacing a turbo that lets go and sheds its blades will be expensive. The use of synthetic oils is recommended in turbo engines. After high speed operation of the engine it is important to let the engine run at idle speed for one to three minutes before turning off the engine. Saab, in its owner manuals, recommends a period of just 30 seconds. This lets the turbo rotating assembly cool from the lower exhaust gas temperatures. Not doing this will also result in the critical oil supply to the turbocharger being severed when the engine stops while the turbine housing and exhaust manifold are still very hot, leading to coking (burning) of the lubricating oil trapped in the unit when the heat soaks into the bearings and later, failure of the supply of oil when the engine is next started causing rapid bearing wear and failure. Even small particles of burnt oil will accumulate and lead to choking the oil supply and failure. A turbo timer is a device designed to keep an automotive engine running for a pre-specified period of time, in order to execute this cool-down period automatically.